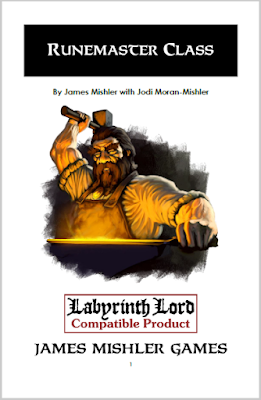 Designed for use with Labyrinth Lord, easily used with any Old School RPG system!

My Keyboard Runneth Over...

Thanks to the pandemic-based fugue I am currently working on a wide variety of projects, and was wondering if anyone out there had any preferences for what they might like to see published next?
Darkness at Red Rose Manor: A “fantastique horror” adventure in the vein of the works of Jean Rollin (Labyrinth Lord);
Dastardly Dungeons: A series of “Save or Die!” small dungeon adventures taking advantage of Dyson Logo’s kind offering of some of his maps for free commercial use;
The Eternal Palace (working title): A science-fantasy Huge Ruined Pile/Megadungeon that is set in a huge ruined imperial palace… think Gormenghast meets the Lost City via Pavis and Big Rubble (Labyrinth Lord);
The Kakonomicon: A series of volumes containing information on demons with 13 new demons in each volume (Labyrinth Lord);
Monstrous Magical Miscellany: A series of volumes containing more monsters, spells, and magic items for Labyrinth Lord;
Realms of Talamhur: A quasi-historical fantasy sandbox hexcrawl campaign setting (5-mile hexes) in the style of the Wilderlands (Labyrinth Lord);
Wilds of Olantis: A map (1-mile hexes) and gazetteer for the Olantis region of Theros (5E D&D, easily used with Labyrinth Lord);
World of Damaria: A high-fantasy campaign setting (25-mile hexes) in the style of Middle-earth or Greyhawk (classic 1E Greyhawk style gazetteer);
Let me know if there are any preferences out there for what you might like to see published, or ideas for other projects that you might like to see someone produce.
Posted by James Mishler at 1:41 PM 3 comments: 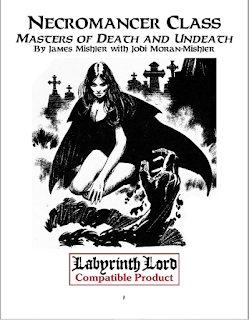 Necromancer Class – Masters of Death and Undeath includes the following new additions to Labyrinth Lord:
Designed for use with Labyrinth Lord, easily used with any Old School RPG system!
15 page PDF (10 pages of content) – Normally $2.49 – $1.25 for a limited time only!
Buy the Necromancer Class PDF now at DriveThruRPG!
Posted by James Mishler at 8:19 PM No comments: 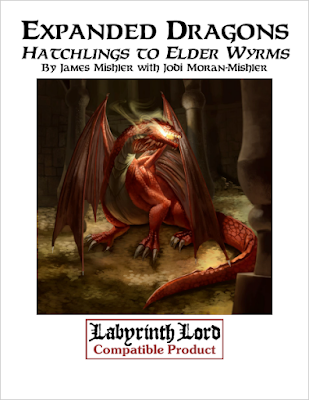