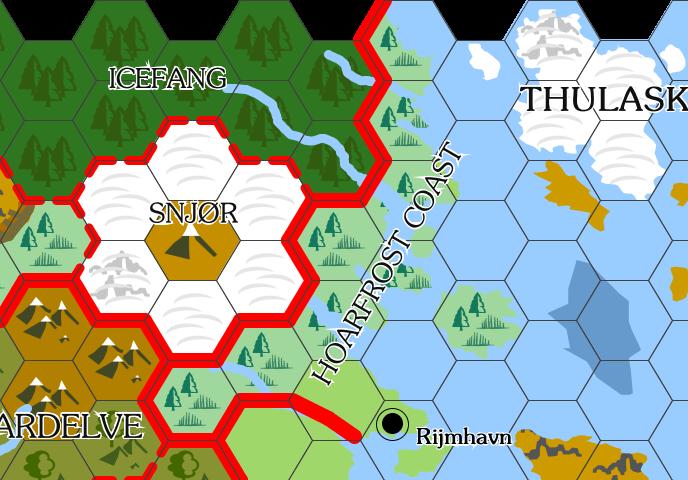 The is a land stuck between the devil and the deep-blue sea – the devil in this case being the Winter King, who dwells in a glacial palace atop at the heart of the . There he has ruled since time immemorial, and thus the peoples of the live ever in his shadow. And since the White Worm arrived in Thulask half a century ago, things have only gotten worse, as the two frosty potentates, one born of Chaos, the other Cosmic, are utterly inimical enemies.

The native humans of the land are savage whose ancestors may never have been south of the save to raid, pillage, and plunder. They are a grim and melancholy sort, given to great rage and terrible cruelty, for they and their culture have been forged in a cruel and savage land. Save for the , which was founded centuries ago by southern traders, there are no cities to speak of, and even large towns are few and far between. Most denizens of this fog and cloud-shrouded land dwell in small villages and steadings along fjord and coast, fishing and hunting in order to keep flesh on bones, for the growing season is short and harsh; most go a-viking once the planting is done, leaving the tending of the small plots to younger boys, women, and thralls.

Their neighbors are even harsher and more brutal, for they often dwell cheek-and-jowl with goblin-men, goblinoids, and ogres. With the preponderance of humanoids, travel by land is actually more dangerous than travel by sea, and there are few trails between the settlements. And travel by sea is not at all easy, for it is home to merrow, scrags, and sahuagin, not to mention krakens and storm giants.

Major Settlements: Jävlafjärd [Bay of the Damned] (pop. 3,300)
Humans: 150,000
Demi-humans: None
Humanoids: Half-Ogres (40,000), Ogres (10,000)
Monsters: Trolls and troldfolk infest the island thick as fleas on a dungeon hound. White dragons like to hunt on the main isle, though they generally lair on lesser isles in inaccessible areas. Frost giants live in the glacier-covered mountains. Frost wolves hunt the forests of the main isle while polar bears hunt along the northern coast and isles. The Unseelie are all too common, as they like to toy with trolls, ogres, and men. Entries to the Underworld are many, though they are known on the isle as “troll-pits” for a reason. The seas are filled with the usual beasts of the ; the north coast is a significant source of ivory from the large numbers of walrus and giant walrus that live thereupon.
Languages: Common; North Gottish, East Gottish, Ogrish, Trollish, Sídhuinn.
Resources: Copper, furs, gems (diamonds), ivory, silver, slaves 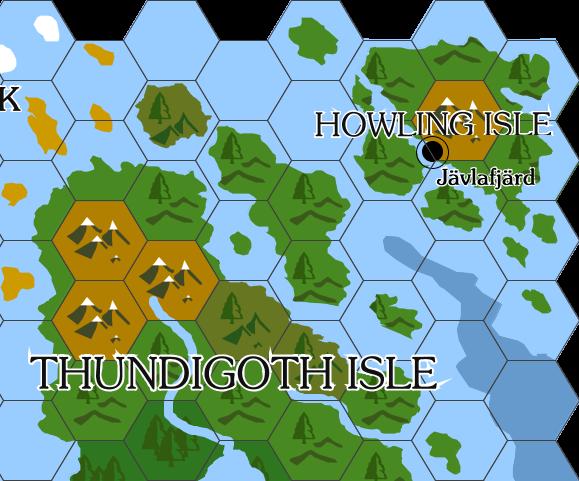 These islands are home to isolated tribes and clans of , descended from colonists from Thundigoth Isle. Were it not for the taking of slave concubines on raid and through trade, they would be as inbred as they are isolated, Many of the smaller clans are, and have been reduced to a feral, almost Stone Age form of society.

Most settlement is along the western coast and into the interior along fjords and rivers. Jävlafjärd is the only major settlement of note, the next largest being merely up-jumped villages with delusions of grandeur. Most of the men are gone all summer, away a-viking in the southern isles. The settlements also raid each other for food, slaves, and ivory, which are sold off-island for gold, iron, armor, and weapons.

The islands are regarded as the homeland of the troll and troldfolk races on the surface world; men and ogres alike are merely visitors, and must continually protect their holdings from the depredations of the native trolls. Though the rightly fear the trolls, they trade with them from time to time to get enchanted weapons and armor, or for other services, such as building stone buildings and walls. The diamonds traded from the island are found only in mines high in the at the heart of the island. They are said to be the sun-stoned hearts of ancient trolls. Many young and no few ogres have lost their lives prospecting for diamonds in the mountains.

The citadel and walls of Jävlafjärd were said to have been built by the King of the Trolls centuries ago. King Haukr Skagisson of Jävlafjärd is said to still possess the ring of troll control that his ancestors used to force the trolls to build their citadel. They say that to sooth the ego of the troll king, his ancestors rewarded him with a king’s ransom in loot from the southern isles and the . 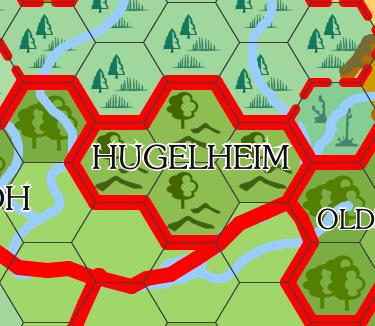 Hugelheim is the homeland of the gnomes. When first the gnomes arose long ago during the Golden Age of Avalondë, they were welcome in both elven and dwarven lands. Later, when the elves and the dwarves fell out during the Wars of Chaos, the gnomes sought to create their own homeland. Long had elves and dwarves shared the lands today known as Hugelheim; as both races retreated from it to find solace in their heartlands, the gnomes moved in and made it their own.

For the Hills of Hugelin are most appealing to elves and dwarves, and thus the gnomes felt right at home. The hills are rolling or craggy, tall of ridge and deep of dale, covered in rolling grasses, green meadows, and deep forests. The lands below are wholesome, with many natural cavern systems and ancient tunnels and halls dug by gnomes and before them, the dwarves. There are, of course, also entries to the Underworld, far too many by gnomish count, but such is the price to pay for the glory of the Glittering Halls of Hugelin.

In the millennia since the founding of their land, the gnomes have welcomed elves and dwarves, halflings and humans. While the elves stayed only for a time and then retreated to the Verdhulann with the arrival of the Elysians, the nearness of the homelands of the dwarves and halflings has meant that many remain family, friends, allies, and countrymen of the gnomes. The humans of the realm are descended primarily from Guidhel with strong influence; any men who were of Goodly sort were welcome to settle in the gnomish lands. By ancient treaty, the tribes of Mhoriedh are allowed to hunt, fish, and wander the hills, so long as they respect the gnomes and other residents, and the alliance has held strong for many centuries.

The gnomes are renowned throughout the Middle Lands as hard, if fair merchants and traders. Most trade along the Upper and Central Great Heart River in large river boats or barges, often hiring Mhoriedhel or Gottic mercenaries and river men. Some trade by land in small wagons or mule caravans. They are highly competitive with the Élyséenais merchants of the Septarchy, whom they consider upstart con-men and profiteers.
Posted by James Mishler at 11:50 AM