B is for Blood Isles, Bugbears, and the Black God

When the first arrived here early in their sea-faring migrations east (not coincidentally, around the time of the arrival of the Elysians) they found a land uninhabited by men, though many ruins could be found half-buried in lava flows and ash. The ruins were of ancient elven sort, as well as an unknown, earlier style marked by ziggurats and obelisks built with marble and bloodstone (both stones not native to the volcanic islands). There were wild sheep, goats, and ponies that roamed the forests and fields; the only native predators were a species of large fox. The immigrants cleared the fertile valleys, planted farms, and settled in for the long haul. 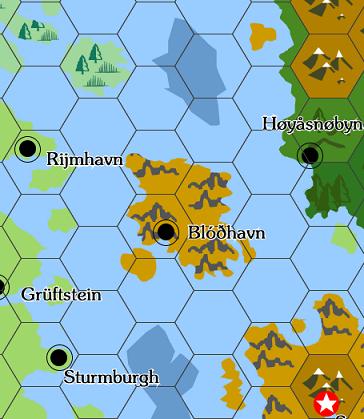 And so for a thousand years the isles, originally known as the Isles of Ice and Fire, were home to a dozen petty tribal kingdoms of typical sort. Then, during the Doom of Elysion, disaster struck. The earthquakes that ravaged the lands of the Serene Sea caused the geologically active isles to explode into activity. Many tribes and petty kingdoms were obliterated instantly, their ruins covered by lava, ash, or ice. Worse, the ancient, unknown ruined ziggurats, which for centuries had been used as quarries and mines for bloodstone, cracked wide open, releasing a torrent of insane, maddened spirits throughout the island.

While most of the spirits are long since faded or fled, the results of their work remain, for they were the last spiritual remnants of devotees of the Blood God. Though the Gotha were aware of the Blood God, prior to this time they generally placated it; now, after whole clans were possessed by these spirits, the island became dedicated to the abject worship of the Blood God in its aspect as the Berserker. Along with the upheavals and the cracking of the ziggurats, a great number of entries to the Underworld opened up, and the followers of the Berserker spread far and deep into the Underworld, becoming the majority human faction in that strange realm.

Not all the residents of the island are madmen, though many are. Most are merely devout followers of the Berserker, or one of his associated Chaos Beasts. As the various kingdoms of the island more often fight each other than worry about invading elsewhere, most are happy to leave the Blood Islanders to their own madness. It is when all the petty kingdoms are united under one king that trouble stirs…

BUGBEARS [HRU’CHUN]
Bugbears are a goblinoid race native to the forests, plains, and hills of the cold northlands, from the Northern Wilds and the Worgwood in the west to the   and the  in the east. Known as the Hru’chun (plural, singular Hru’chuk) in their own tongue, bugbears have dark black skin hidden under a thick, oily fur. Eyes are pink to red. Fur ranges from white, gray, brown, or black, often with a lighter mask upon the face and one, two, or three lighter stripes upon the back. Some tribes display spots of lighter fur upon their chest and throats.

Their legs are short for their build, and the pads of their wide feet are thick, giving them the ability to move quickly over snow with a shambling gait and, otherwise, to move quite silently when needful. Bugbear faces are vaguely mannish in form, with a broad oval head with a thick brow ridge set over deep-set eyes. They have large and broad furry orc-like ears. The mouth is wide, protuberant, and filled with sharp teeth. The nose is squashed and flat. Bugbears stand about 7’ tall with a broad build and weigh 300 pounds. Bugbears can live to be about 60 years of age.

Hru’chun originated far to the north, upon the frigid plains beyond the Northern Wilds. They are said to descend from the goblins who served the Ice Lord Golgathrim in the elder days. As such they are especial enemies of dark elves and utterly inimical to elves and dwarves. Prior to the Fall of Avalondë they were bottled in the north; since that time and in the ages since, they have become as wide-spread as any of the goblin races, though never living in any great numbers or large tribes save in their native frozen north, where they are unchallenged save by ice dragons, giants, and ogres.

In the south they tend to remain aloof from their cousins, the goblins and hobgoblins, only working with them when driven to do so by some greater power. They are the least talented of the goblins when it comes to smithcraft. Few bugbears know how to work metal, and their weapons tend to be crude and weak. They prefer to steal weapons or, at need, make them of wood, bone, and stone, a skill at which they are excelled only by the cavemen of the .

BLACK GOD
The cult of the Black God is an ancient cult, originally held by Guidhel druids of modern-day Mhordlakh. There, at the heart of the Blackwood, they found a lonely black mountain; at the base of this mountain they found the ruins of an ancient temple. Deep within the temple, far under the mountain, was a black cyst. Within that cyst they found the Black God, so called because no one could see him in the absolute darkness of his black pit. But those who stood by the edge of his pit, he whispered to, and taught them many dark secrets of the earth.

The Black God is also known as Chernobog; however, no one with a lick of wisdom ever speaks that name save in the appropriate ceremonial rituals. He is also called by various epithets, such as the Father of the People, the Speaker from the Pit, the Shadow Demon, and the Dweller in Darkness. His origins are unknown; the most likely theory among sages is that he is a wayward son of Lady Night. That his priests do not persecute the Mhordlakhy nunneries dedicated to Lady Night gives some credence to this belief, though there is no connection in the canons of either faith.

The priesthood of the Black God was absorbed by the agnostic Mhordlakhy when they invaded and were assimilated by the Guidhel and Kartaghans of the land. As the Black God worked on a quid pro quo basis, they felt that this, of any god, would fit their needs. The priests of the Black God are potent in magic dealing with growing things of the earth, such as plants and animals; in divination magic, scrying, and creating darkness; and in necromancy, abjuration, and alchemy. They do not have any healing spells, though they are proficient enough in alchemy to create healing poultices.

The common village priests of Mhordlakh, Bagaudia, and Nhorr concentrate on the spells of soil, sowing, and reaping, as their druidic forebears did ages ago. Those who attain greater powers remain at the ancient temple at the base of the , where they serve the Black God and earn gold and jewels for their services to the Mhordlakhy Wizard-Princes. Much of this treasure is spent in acquiring beautiful maidens, who they cast into the cyst in sacrifice to their god.

The priests of the Black God wear black robes, those of village priests trimmed in white and silver, those of the seers trimmed in yellow and gold. Hair is worn long, as are beards. Black peaked hoods are worn, the taller the hood, the greater the rank. Priests must remain chaste and celibate, cannot eat the flesh of fish, fowl, or wild game, and may only wield dagger and staff. The Black God does not accept women in his service, though neither does he nor his priest oppose their service in the nunneries of Lady Night.

The goodly afterlife promised is much like follower’s daily lives, though a better in all ways. For those who do not make the cut, eternity is confinement to a dreary, dark Hall of the Dead in the Underworld. And for the disobedient and disrespectful, the Black God promises one of the Burning Hells, to be consumed and voided by demons over and over for all eternity.