C is for Crimson God

The Crimson God is a god of the old South, one of the last major surviving, or at least, still active Old Gods of Deshret. The only other deity remaining from that era that has any sort of significant following is the Silver Lady, by legend his sister and/or wife. Some sages have conjectured that Kryx is his, her, or their son. 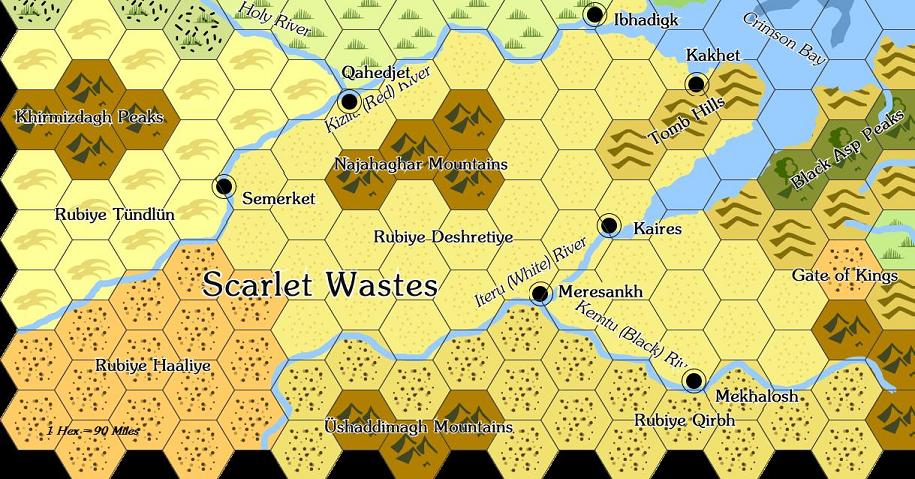 Also known as the Old Serpent, the Great Scorpion, or the Demon Jackal, the Crimson God is a god of the desert and wastes. He is a wrathful god, harsh and demanding of his followers and priests. Being the only remaining major Deshreti god, his worship is widespread in the Scarlet Wastes and throughout the South. His cult is still found to the north, as well, but is not generally openly practiced, as it was severely repressed in the days of the height of the .

The Old Serpent requires regular sacrifices of wealth, animals, and human lives. In most temples the animals and humans are sacrificed on an altar, their blood spilled by sharp blades of obsidian. In other temples, they are thrown to giant serpents, giant scorpions, or packs of temple jackals. Stylized versions of any of these three creatures are used as his holy symbol. Half of all treasure sacrificed is hidden away in the vaults of the god; the other half is used to support the priests. His priests truly know their god’s wrath on the occasions when his vaults are pilfered by thieves.

The priests of the Crimson God are mighty in the all ways of magic, priestly, sorcery, wizardry and eldritch wizardry. They command powerful spells of fire and wind, death and necromancy, and are masters of summoning demons to do their bidding. They possess no spells of healing, but are talented at the arts of alchemy, and thereby provide their worthy and wealthy followers with healing poultices. Priests wear crimson robes trimmed with hieroglyphs and don gold jewelry in the design of snakes, scorpions, and jackals. They wear headdresses of various sizes and forms that indicate their rank.

Priests must shave off all hair, including eyebrows; many have the holy scriptures of their faith tattooed upon their bodies. They must remain vegetarian, giving unto their god the animal flesh that they would otherwise consume. Both men and women may serve the Crimson God; they have no requirement to remain celibate or chaste, and often are quite depraved in tastes and practices. If they should have children they must sacrifice their first-born child to their god.

Followers of the Crimson God, when they die, find themselves being judged by their god personally. If they have been obedient and fulfilled their allotted place in their mortal life, they are granted more of the same in eternity, in the Crimson God’s Great Hall of the Afterlife. If he feels they have failed him, he casts them into one of many, many different Hells, depending on their sins and failures. The worst of the failures are consumed by the god himself in his serpent aspect, to ever burn in the acids in his gullet.
Posted by James Mishler at 11:02 AM