S is for the Storm Isles

Capital: Søslanghavn [City of ] (pop. 17,500)
Humans: 250,000
Demi-humans: Few
Humanoids: Few
Monsters: The isles themselves have few monsters, but the waters around them teem with krakens, sharks, and sea serpents. There is a large amount of faerie activity on the isles, as usual, likely due to the lack of other monsters to provide competition. Some of the isles are known from ancient days as burial grounds, and are covered with large numbers of barrows; many of these are used as sidhe by the faeries, while others are occupied by wights, wraiths, and other undead and their ancient treasures.
Languages: Common; North Gottish, East Gottish, Elysian.
Resources: Copper, food (pickled fish), gems (coral, pearls), ships, spices 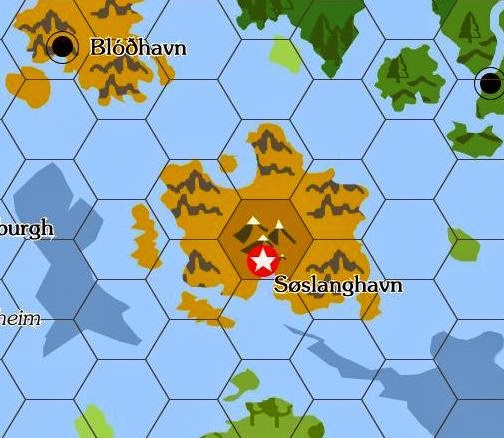 When the first settlers arrived on the Isle of Storms 2500 years ago, they discovered primitive, savage, and decadent tribes of disparate peoples. The decadent folk living in ruined cities and citadels were extirpated, as were the strange savages of the valleys and shores, while the primitives of the forested hills and cold mountains were eventually assimilated over long centuries. It was this savage mix of primitive and barbarian that eventually spread out as the core of the Nordgottisch peoples to conquer the isles of the of and eventually to return west, to settle the and found new tribes that, centuries later, poured from the Starcrags and crushed the Olden Empire under their heels.
Thus the of the Isle of Storms are a proud, prideful people, and consider themselves as the first among equals of the race. They cleave to the , or so they say, and claim to have the purest bloodlines. The caste system of the Sturmølings, as they are known, is quite strong, as is the class system of Noble, Priest, Warrior, and Thrall. Fortunately for the denizens of the and further lands, the Noble Clans of the Sturmølings are a fractious bunch, more given to fighting over internal rivalries than uniting for further conquest. Thus most encounters with Sturmølings are merely viking raiders or merchant traders rather than the cold, hard conquerors of centuries past.

The Sturmølings are additionally riven by their religious loyalties, with the ancient triad of Iron God, Storm God, and Lord of Deep Waters being the three primary factions. Currently the temple of the Lord of Deep Waters is ascendant, in a personal alliance with the Bleydhja Clan. While the matriarch’s grip on the temple is strong, her hold on the clan is weak. Her foolish, open attempts to strength her temple’s power at the cost of the other temples, and at the cost of no few nobler clans, has nearly driven the noble houses to open civil war.
Posted by James Mishler at 10:42 AM

Email ThisBlogThis!Share to TwitterShare to FacebookShare to Pinterest
Labels: Gazetteer of the Olden Lands, Gotha, Isles of the Sea of Storms, Olden Lands, Previews, Storm Isles