Realms of Murikah Midzee Lands Maps
In the year 2419 the Golden Age of Man came to a cataclysmic end with the Great Rad War. The terrible weapons used in the war scoured the earth, razed mountains, boiled seas, turned the planet on its axis, and caused the very face of the world to change forever. Man’s civilization was cast into ruin, and the essential natures of men, beasts, and plants were forever altered thanks to the Glow of the Rad, which created whole new monstrous life even as it destroyed for all time other forms of life. 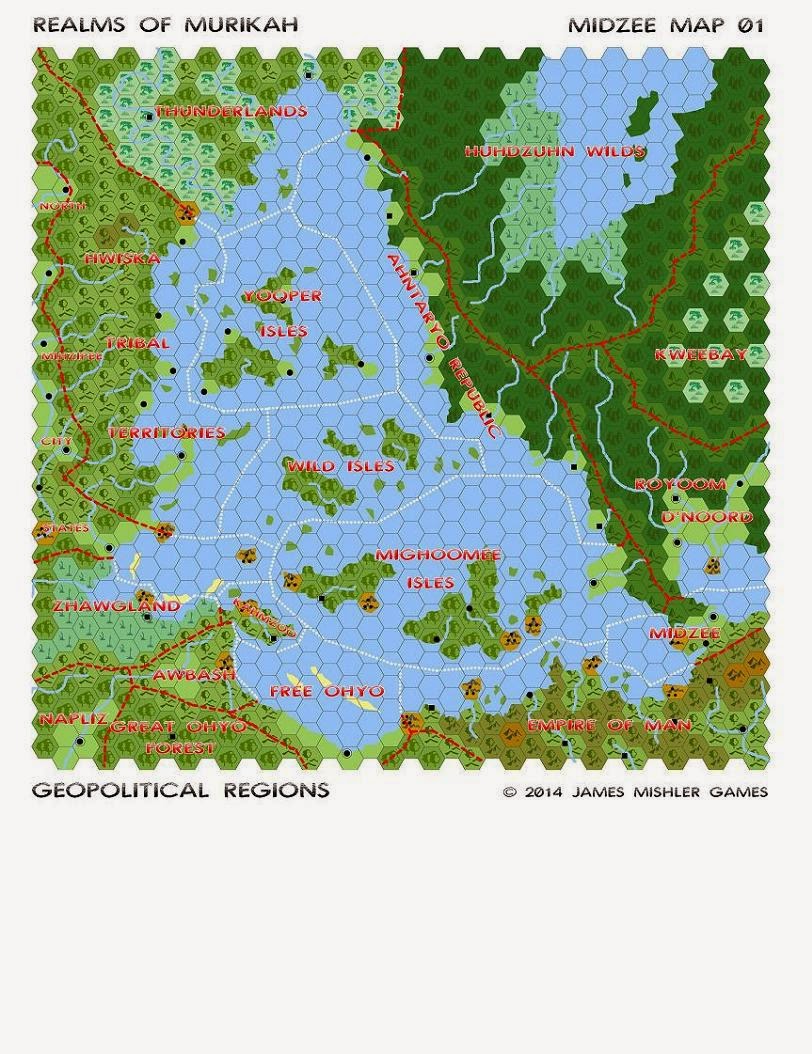 Five hundred years later Mutants – men, animals, and even plants – all but overwhelmed the remaining tribes of Pure Men. For a time it seemed that Pure Men might truly be extirpated by the descendents of those who suffered from the follies of their ancestors. But then, unto the Pure Men came the gods – or at least, beings claiming to be the gods. These first gods claimed to be the Old Gods of Law returned, to help gird the Pure Men in their battles against mutant-kind, to turn the tide of savagery back and hold aloft the light of Civilization. Odin and Zeus, Horus and Huitzilopochtli, the Angels Gabriel and Michael, and others – out of lost and garbled myth and legend these potent beings came forth and taught the disparate surviving tribes of Pure Men the rites and rituals that would perform divine magic.

And magic it was that turned the tide for the Pure Men. Slowly, haltingly, the tiny realms into which the mutants had thrust the Pure Men grew. Crusading priests of these Old Gods drove back the mutant menace; villages grew into towns, towns into cities, and cities built kingdoms. A thousand years after the Great Rad War the land of Murikah was divided into scores of petty kingdoms; most possessed a poor level of technology, at best on par with that of the ancient Dark Ages, as most of the Old Gods called for the rejection of the high-technology of the lost Golden Age as much as they called for the purging of the mutants from the lands held by Pure Men in the name of Law.

Slowly, the mutants were being driven back into the wilds, as kingdoms grew and empire building began again. Then two things happened at about the same time, both inimical to Law and Civilization built by the Old Gods, which would change the course of history.

First, the Other Gods appeared. The Other Gods are the gods of Chaos, the ancient, dread enemies of the Old Gods – Asmodeus and Tezcatlipoca, Set and Hecate, Tiamat and Tsathoggua, among many others. To oppose the Old Gods and their Pure Men worshippers, they patronized the mutant races, and granted unto them the same magical might that the Old Gods gave to the Pure Men.

Secondly, renegade Pure Men, who had chafed under the rule of the priest-kings of the new kingdoms, sought to gain the power of magic without being required to bow and scrape before the Old Gods. Whether they discovered it themselves or the Other Gods presented them with the needful information, these heretics and free-thinkers gained the power of Wizardry, the arts of arcane magic – the command of magical forces outside the dispensation of the gods.

But these budding wizards discovered the hard way that magic has a price – without the proper wisdom to rein it in, magic rapidly masters he who thought he was the master of magic. Over time, they discovered that this weakness could be mostly overcome through application of aspects of pre-Rad super-science. And so the Sorcerer-Scientists arose as a faction of the new wizardly groups. Unfortunately, a side effect of the application of super-science to the minds of these magi is that it usually drives them insane!

Thus, even as the kingdoms of the Pure Men were staging a great resurgence, the Chaos Priests of mutant-kind, the scholarly wizards and scientists of the renegade fringe of Civilization, and the megalomaniacal sorcerer-scientists of the wilds exploded into action. For a thousand years countless factions fought each other amidst the ruins of the Rad Glow. In some realms, wielders of divine and arcane magic learned to cooperate; in others they fought tooth-and-nail. Science was reborn, as men and mutants sought every tool in the battle for supremacy. Empires rose and fell; whole new races and civilizations grew and fell into ruin.

In the end the Sorcerer-Scientists allied with the Chaos-Priests of the Other Gods and their mutant followers against the forces of the Law-Priests of the Old Gods and their allied Wizards and Scientists. Chaos and the Sorcerer-Scientists won; the Kingdoms of Law were crushed, their lands and people split among the allied factions, and for most of the following thousand years a true and terrible Dark Age fell upon the lands of Murikah.

The forces of Law retreated into the wilds, there to hide, lick their wounds, build their strength, and bide their time. For they knew that the one great weakness of Chaos was that, by its very nature, its followers could only remain allied and at peace with one another for so long. And so it was; within a few generations the old alliances fell apart, and the factions began fighting one another for territory, dominance, or extermination. A century ago the last of the great Chaos Empires collapsed in civil war. Today, Murikah is a patchwork of Law and Chaos, Pure Men and Mutants, magic and technology and super-science.

In the lands of the Midzee, the vast freshwater sea where once stood the five Great Lakes, Chaos still has a strong hold in the Mighoomee Isles, in the city of Granpoor, in the Thunderlands, and in the wastelands of Zhawg, Kahmzoo, and the other ruins of the great cities left from the Great Rad War. Of the forces of Law, only the Ahntaryo Republic and the Empire of Man oppose them. And in-between there stands a patchwork of petty kingdoms, decadent city-states, savage tribes, Glow-ridden ruins, and mutant-haunted wilderness…

This pack includes two maps to begin with, the Geopolitical Map and the Settlements and Ruins Map. Further Midzee maps will be posted here; a gazetteer will be sold separately. The map pack is [b]Pay What You Want[/b]!
Posted by James Mishler at 4:11 PM