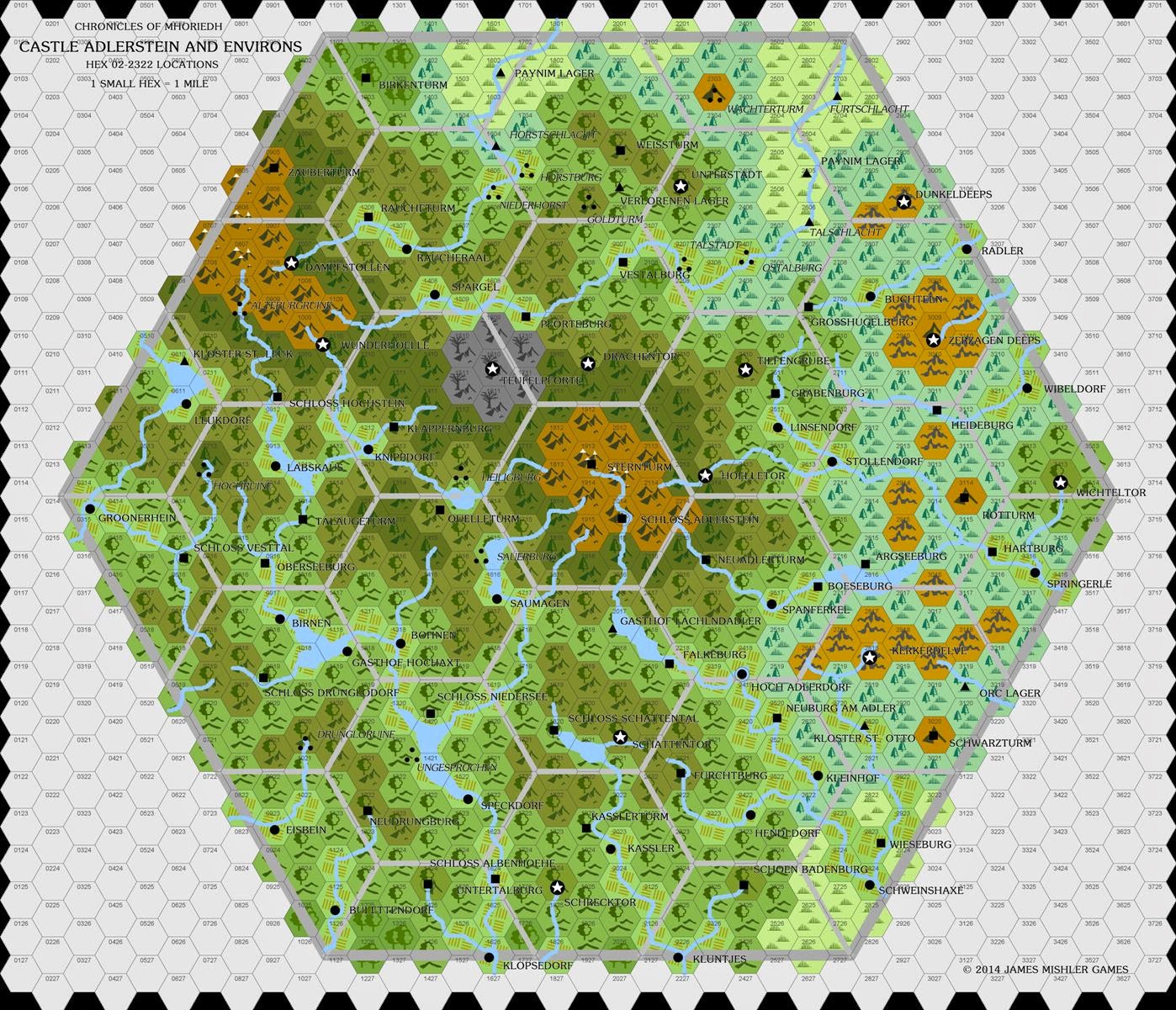 ABOUT THIS PRODUCT
This map pack includes six maps depicting Hex 02-2322 of the Chronicles of Mhoriedh Campaign Setting. This hex features the infamous Castle Adlerstein and the many strange and unusual dungeons, caverns, and oddities found in and around that ancient storied ruin.

This product (JMG25HEX01M) is the “Pay What You Want” version of the complete detailed hex, and only includes the maps; the full product (JMG25HEX01) also includes a gazetteer detailing the listed settlements, castles, forts, towers, ruins, dungeons, and other locations of interest. A further series of map supplements breaks down 19 of the constituent 5-mile hexes further, featuring each hex (along with further details) at a scale of 1/5th of a mile per small hex.

The included maps depict a single 25-mile hex (Hex 02-2322, meaning Hex 2322 of Regional Map 2: Middle Lands and Northern Wilds) at a scale of 1 mile per small hex; for ease of viewing and for use with the later 5-Mile Hex break-downs, 5-mile hexes are also provided on the maps.

CM02232201 GEOGRAPHYNAMES
This map provides all the named geographical regions of the area.

CM02232202 SYMBOLNAMES
This map provides all the settlements, fortifications, ruins, and other larger, major features of note in the region; this map uses smaller symbols to denote such, in order to keep the view of the map relatively uncluttered.

CM02232203 LOCATIONNAMES
This map is the same as the SymbolNames map above, but uses classic depictions of the location types, making for a more artistic if cluttered map.

CM02232204 PATHS
This map depicts the paths between various locations. It is to be noted that the whole of the region is quite mountainous, and even those regions otherwise depicted as flat, open, or even plains topographically should be considered hilly for movement purposes. Such terrain surrounded primarily by mountains (such as the U-Shaped valleys high in the mountains) should be considered mountainous for movement purposes.

Paths on the map are not roads, not by any stretch of the imagination; they are wagon-ruts through the wilderness, and for movement purposes, should be treated as such. The best path through the region is the short stretch between Schweinshaxe and Hoch Adlerdorf via Kleinhof; this is almost counted as a road, though just barely, due to recent investment by the Prince of Adlerstadt.

CM02232205 DOMAINS and CM02232206 DOMAINSNAMES
This map depicts the local domains of the region; the thick full red line in the south shows the northwestern border of the Fuerstentum (Principality) of Adlerstadt; domains south of this line (those with name in italics) are subject to the rule of the prince. The thick full red line in the north is the southwestern border of the Grosshergzogtum (Grand Duchy) of Moorgaard; as most of Moorgaard is currently overrun by Paynims and Orcs, the former borders of the former petty lords under the rule of the extinguished Grand Ducal line are moot.

The other local rulers are independent Freiherrn (Barons), Grafen (Counts), or other domains of independent sort and of various types (each with one or more petty points of precedence over one another). Most were allied with either Adlerstadt or Moorgaard, and now with the invaders at their doorstep and stuck in the throes of the Great Plague are less unified than ever before.

CM022322 SUBHEX D WUNDERSPITZE
This map provides a preview of the forthcoming map supplements depicting the breaking down of the 25-mile hex into 5-mile hexes, each further broken down at a scale of 1/5th of a mile per small hex.

25HEX 5-MILE HEX COORDINATES
This page provides the coordinates used when breaking down the 25-mile hex into the 5-mile hexes for further subdividing into 1/5th of a mile hexes. Hexes D, E, F, I, J, K, L, N, O, P, Q, R, T, U, V, W, Z, AA, and BB will be subjects of further development in the JMG25HEX01 Supplements; the other half-hexes will be left for further development at a later date, should the adjacent 25-mile hex be developed (in such a case, the supplements for said hex would include 21 rather than 19 sub-hexes).

PRINTING RIGHTS
You are hereby authorized to print any of the maps included with this product for personal use only. Please do not sell, share, or give these maps away, either in electronic or print form, except as excerpts as needed for your personal campaigns.

THE FINE PRINT
Find out more information about the Olden Lands™, the Chronicles of Mhoriedh™, and other products from James Mishler Games at http://jamesmishlergames.blogspot.com or e-mail us at jamesmishler@gmail.com

The maps of the Castle Adlerstein and Environs Map Pack were created using the most excellent map-making program, Hexographer, available through Inkwell Ideas at www.hexographer.com

Click here to pay what you want to get the Castle Adlerstein and Environs Map Pack
Posted by James Mishler at 1:18 AM 6 comments: