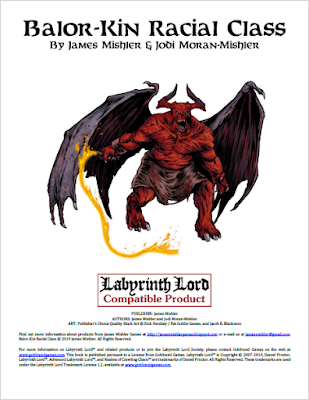 Just in time for Halloween, we are pleased to present you with the Balor-Kin Racial Class for Labyrinth Lord!

This is your chance to finally play a “young balor,” as has often been described in early gaming!

The balor-kin are cousins of the Balor Demons of great infamy. They have many of the same powers, but no two balor-kin are alike, as is befitting their Chaotic Demonic origins!

Balor-kin have the following abilities:


The balor-kin racial-class has 10 levels, each more fiendishly powerful than the last.

This Halloween, get ready to get your demon on!

Click here to buy the Balor-Kin Racial Class at DriveThruRPG!