The Expanded 20-Level Core Four Classes provides a new, expanded version of each of the four core Labyrinth Lord classes, for use with Labyrinth Lord and Advanced Labyrinth Lord. In the vein of the original concept of the “companion rules” to the original BX series, this gives players something to look forward to at higher levels – indeed, at every level! 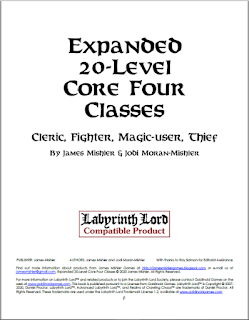 In addition to the core class abilities of Spellcasting and Turning Undead (which now goes all the way to 20!), the Cleric gains Ritual Magic, Holy Smite, Divine Intercession, Guardian Angel, Sphere Spells, and the awesome power of Deus Ex Machina!

Fighters regain their long-lost Battlefield Dominance, Multiple Attacks, and Weapon Specialization, plus the ability to Seize Initiative and perform Heroic and Super-Heroic Surges!

If you like these expanded classes, you will love the Expanded 20-level Demi-Human Classes, also available, and Pay-What-You-Want!

Posted by James Mishler at 8:22 PM