[SALE] Coronavirus Pandemic Sale -- Everything is 50% Off!

The Gary Con XII Pay What You Want Sale has ended.

The Coronavirus Pandemic 50% Off Sale has begun.

Through the end of the Coronavirus Pandemic in the United States,
all James Mishler Games products are 50% off.

Click here to go to James Mishler Games on DriveThruRPG

Posted by James Mishler at 12:18 PM No comments:

Lands of Ub -- Region 01A Frelengian Heartlands Map Pack
Domains, Geography, and Locations Maps
$1.00 CHEAP -- Pay What You Want (For a Short Time Only!)

Almost a thousand years ago, savage barbarians invaded the lands known today as Frelengia. For decades the people of the land were terrorized by these barbarians, until, in the 929th year of the Empire of Ub, a great warrior arose from among the peasantry. His name was Bosco, and he was a cowardly turnip farmer. But one day while a gang of gnolls was raiding his turnip patch, he got fed up and shooed them away with his pitchfork. This caused the entire local horde to break morale, as no one had stood up to them before, and they all fled the village.

Bosco, lifted on the shoulders of his fellow peasants, became a hero that day, the first in what became known as Warner’s Crusade – for that was his full name, Bosco Warner. From a few fellow peasants with courage, Bosco gathered together a mob of angry peasants armed with torches and pitchforks. He trained with foreign knights; his core followers became knights, and over time his peasant mob became an army of soldiers. And this army, together with his good friend, the wizard Frelengo, was able to throw the barbarians out of the land.

With their victory, the people proclaimed Bosco king, and he was crowned by his good friend Frelengo, after whom Bosco named his kingdom – Frelengia. Bosco ruled long and well, but never married nor produced an heir. Instead he adopted his loyal pig-folk squire, Hamhock, who became Prince Porque Warner, and soon thereafter became King Porque, upon the death of Bosco “The Great” in 989 AU (Anno Ub). King Porque I “The Kind” founded the First Warner Dynasty the Regnabit Porcorum (Reign of Pigs).

With the death of his good friend, the wizard Frelengo retired from politics and founded his own personal legacy, Prestidigitators University (or “good old P.U.,” as its graduates like to call it). He gathered together all the greatest wizards of the day, developed a curriculum, and built a college campus high in the Magic Mountains, where the mother campus of the university remains today, with the town of Warlock having grown up around it to serve the students. Even today, almost a century after the fall of Frelengia, PU still graduates no few magic-users every year.

Altogether, from its founding to it fall, the Kingdom of Frelengia had five major dynasties:

By 1730 AU Frelengia was deep in decline, under the rule of the Third Mad King of the Fifth Warner Dynasty, Daffyd VII “The Maddest” (following Daffyd V “The Mad” and Daffyd VI “The Madder”). All her overseas possessions had long been lost, the dwarves and elves of the realm had long since declared autonomy if not outright independence, and another savage barbarian horde had appeared out of the north, the Svinings, Viking warrior-pigs who followed the savage god Svino and his sister, the goddess Sugga the Enchantress.

Even as the Svinings were invading from the north, the Empire of Ub (the Seventh Empire of Ub out of New Ubopolis) had sent an invasion force across the Sweet Sea, landing at Sweetport (known today as Uberia, the Imperial City). Caught in a vise between two powerful enemies, Daffyd VII took half his army and most of the royal wizards to meet the Imperial forces in the south, while Daffyd “The Black Prince,” his equally mad but very cunning son, took the other half of the army to meet the Svinings in the north. Both king and prince met their end on the same day in 1749 AU, the king at the Battle of Lost Forest (a massive battle in which armies of wizards reduced the forests and competing armies to ashes), and the prince at the Battle of Styborg. In the century since, the kingdom of Frelengia has fallen into disparate pieces. It is a time of chaos, a time of war, a time of danger – it is a time in search of heroes to right wrongs and drive back the darkness…

The Campaign
… but of course, most of your player’s characters won’t be interested in that stuff. Well, maybe the paladin, but the rest are going to be little more than mercenaries, adventurers, and murderhobos out for gold, glory, and power. To run this campaign…

These three maps provide detail on the Domains, Geography, and Gazetteer Locations of the Frelengian Heartlands. The scale is 5 miles per hex.

Posted by James Mishler at 1:50 PM No comments:

[Sale] Gary Con Sale -- Everything is Pay What You Want!

As everyone well knows, Gary Con XII has been cancelled due to the ongoing pandemic, so my first booth at the show will simply have to wait until next year.

Instead, to celebrate Gary Gygax's life well played, I am offering all James Mishler Games products at Pay What You Want!

Yes, everything, from the Barbarian Class through to Ghosts -- The Incorporeal Undead, is currently available at Pay What You Want pricing!

This will last through to the end of the weekend, or whenever I get around to changing things back on Monday.

So take advantage of my insane generosity while you can!

Click here to take advantage of this amazing offer! 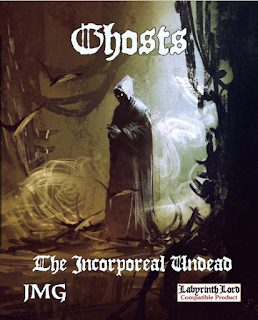 Cover for the unreleased special edition print version of
Ghosts -- The Incorporeal Undead,
which will see release at Gary Con next year...
Posted by James Mishler at 3:05 PM No comments: