SCARLET WASTES
The Scarlet Wastes are a vast region of dry, parched soil, cracked salt flats, gravelly rocky desert, vast ergs, and great seas of shifting red sands. The portion of the wastes on the map cover more than 600,000 square miles; the entirety of the wastes extend for more than 3,000,000 square miles to the south, southwest, and west. Arms extend into the Purple Plains to the north, while sands flow east through the Gate of Kings, the plain between the and the into Kryx. Along the coast, the sands and packed earth can reach as far as the waters of , though generally there is a fertile strip up to a mile wide separating the wastes from the waters.

The Scarlet Wastes and the river lands that meander through it are the home of the Deshreti, a race of red-skinned men, who long ages ago built a great empire in these lands. There were more rivers then, and the land was much more fertile, the worst of the deserts depredations found only to the south. But the climate changed, the rivers shifted their courses or dried up altogether, and since then, long before the arrival of the Elysians, the Deshreti have been merely living in the world their ancestors built.

The nomads of the wastes retain their ancient culture, but the peoples of the rivers and coast are mixed, from long centuries of wars and migrations, mostly with the blood of the Kartaghans of the Purple Plains, to a lesser extent with the Elysians who came by the sea, and too, with the Manday from the south, both via conquest through the Gate of Kings and by trade and raid from the south, for the Iteru runs deep into Mandayan, and far to the south it is black kingdoms that rule the banks of the river.

The waste is split into four major divisions by the three great rivers of Deshret, the Kizilu or Red River in the north and west, the Iteru or White River in the south and east, and the Kemtu or Black River, a tributary of the Iteru. 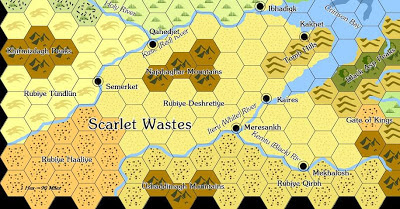 To the north and west of the Kizilu the desert is known as the Rubiye Tündlün, and is mostly deep maroon to scarlet hard-pan, with undulating waves of red, maroon, and purple sand dunes that sweep into the Purple Plains. The small range of mountains at the heart of the waste, known as the Khirmizdagh, consists of tall, round, flat-topped tors of purple-black basalt. The Tündlün and the Khirmizdagh are home to manticores and griffons.

To the south and east of the Iteru and south of the Kemtu, east to the verge of the Ormakh Mountains and far to the south, the waste is known as the Rubiye Qirbh, and consists of expanses of highland salt flats covered in dunes of white salt, large patches of midland blackened earths covered in black sands, and hard, parched red lowland clays covered in red sands. The low, flat mountains in the western portion of the Qirbh, the Üshaddimagh, reflect the overall pattern, having white caps, black midranges, and scarlet red bases.

The Qirbh is broken up into long series of wide, flat step ridges, running north-south parallel to the foothills of the . Strange formations, including many natural monoliths, arches, hoodoos, columns, walls, steps, and mushroom rocks are found in profuse numbers along the demarcation lines of elevations. , primarily quartzes, naturally occur on the surface, and are very common in the caverns that can be found within the step ridges. The Qirbh is home to basilisks, while many chimeras make their lairs in the Üshaddimagh; the chimeras continually battle with the sphinxes of the Ormakh for hunting rights to the Qirbh.

To the south and west of the region where the two rivers come close to meeting, the waste is known as the Rubiye Haaliye, and consists of great highland of dry rugged hills, canyons, ergs, and ancient volcanic plugs and newer cones, interspersed with small seas and large lakes of the ubiquitous red sands. Hidden among the highland canyons is the Silver Gate, which leads under hills and wastes for many miles unto one reaches Naptera, City of – the greatest stronghold of the Silver Queen in Deshret. The large, hidden (in truth, a caldera) is rich and fertile, fed by many springs and protected not only by its isolation, but also by is army of warrior-priestesses. The Deshreti of the valley hearken back to the olden days, and are perhaps of the purest of their line, even moreso than the nomad tribes of the wastes around them.

Finally, the region north and east of the rivers is known as the Rubiye Deshretiye, and consists of bare brownish-red bedrock covered in red and brown gravel, the gravel covered in red sands. At the heart of the desert between the two great rivers stands a range of jagged red peaks, the Najahaghar. There, upon the west face of the highest peak, can be found Nakhada, the City of the Crimson God. Site of pilgrimage for all the devout (who may thereafter append the term “Nakhadji” to their names), the city is thoroughly dedicated to the decadent and depraved needs of its priests and pilgrims. Great cyclopean walls of blood-red stone (said to have been laid down by genies), protect the city from any attacks. Giant crimson snakes and scorpions wander the streets at will, the pets of the priests; woe unto him who does not accept his chosen fate, should one wish to dine or even merely play!
Posted by James Mishler at 3:19 PM No comments:

Capital: None; the major settlements are:
Bondyemòn [City of the Gods] (pop. 16,100)
Zhënghinpur [] (pop. 19,500)
Humans: 900,000
Demi-humans: None
Humanoids: Gnoles (240,000), Half-Orcs (60,000), Gnolls (40,000), Orcs (30,000)
Monsters: The Yasdunn is renown as the home for all the most unusual creatures, many of which have never been categorized. The best known of the strange beasts of the Yasdunn are the dinosaurs, which in the jungles are found in all shapes and sizes. Other notable monsters and beasts include giant and miniature forms of common animals, white apes, cavemen, black and green dragons, elephants, giant hyenas, giant insects, man-eating plants, giant snakes, and giant spiders. Like Eosha, it is home to many strange tribes of peoples of human, but highly-exotic sort.
Languages: Kartaghan; Manday, Eoshan, Kartaghan, Gnoll, Orcish.
Resources: Animals (unusual), gems (diamonds), gold, nyumbanyama hide, spices, woods (rare) 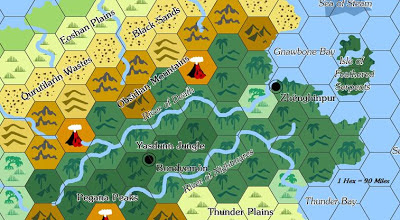 The deep, dark jungles of the Yasdunn are home to flora and fauna otherwise foreign to the Olden Lands. The River of Death and the River of Nightmares, despite their names, are quite rich and life-giving, as they and their attendant tributary rivers and springs, together with intermittent monsoons off the Sea of Steam, bring life to an area that otherwise would likely be baked desert, like the wastes to the north of the Obsidian Mountains. The rich volcanic soil and the verdant waters enable growth of tremendous trees, huge ferns, and a plethora of flowers, vines, and bracken. The jungles, as noted above, are also home to a wide variety of unusual beasts, many encountered nowhere else in the Olden Lands.

The peoples of the Yasdunn are as strange and variable a lot as the flora and fauna. Tribes of Manday, Kartaghan, and Eoshan sort live, trade, and war with one another and with the gnoll and orc tribes. Many tribes are of mixed races, with some including the full variety of human, gnole, gnoll, half-orc, and orc types. Tribal loyalties are based on mutually held cultural beliefs, religion (usually Green God, Animal Lords, or Beast Cults, sometimes Paynim), and to a lesser extent language groups, not races. Tribal cultures are technologically primitive, as there are no good local sources for iron, copper, or tin and most tribes use stone, wood, and bone.

Other than a handful of towns on the south face of the , Zhënghinpur is the only true city of any sort in the region. It is a den of cutthroats, pirates, and villains from across the Seven Seas. The city of , the ultimate source of the diamonds traded out of the Yasdunn, is known only in myth and legend; it is inhabited by white apes and their human, gnoll, orc, and half-breed slaves, who labor for the white apes and are sacrificed in the name of their god, the potent Cosmic Entity known as Shub-Niggurath.
Posted by James Mishler at 12:14 PM No comments: