This is the first in a series of Gods, Demi-Gods, and Cults products that are designed to provide a Judge with complete details on the gods, demi-gods, quasi-deities, exalted beings, religions, temples, and cults of the Olden Lands. 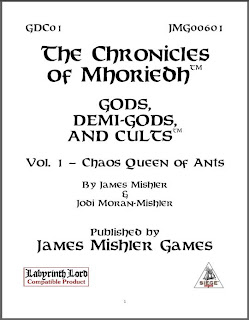 Each GDC module includes the history of the deity, a detailed description of its personality and plots, cult and followers, and complete stats for Castles & Crusades and Labyrinth Lord. Also included are any new spells, monsters, and magic items germane to the deity, its powers, and cult.

The Chaos Queen of Ants, Khraliche Karinkhamür, is an ancient Chaos Beast, said to have been revered and feared by primitive man since the days before the Empire of Deshret. Survival of her cult in the face of great competition by other deities, Chaos Beasts, and the various crusaders of Law is attributed to the fact that she is not incarnate in a single body, but in many avatars. Her worship originated in Mandayan, and in the Olden Lands she is most popular in Eosha, Kryx, Deshret, and the Purple Plains.

While designed to be used with the Olden Lands campaign setting as described in the Chronicles of Mhoriedh series, any GDC deity can be readily adapted to just about any other campaign setting, whether High Fantasy, Low Fantasy, Sword & Sorcery, or Historical Adventure.

Buy it now at DriveThruRPG

Buy it now at RPGNow
Posted by James Mishler at 11:26 AM