I started thinking about designing some new ghosts for Labyrinth Lord when I first wrote the Spontaneous Generation in the Dungeon article for my blog. I realized at the time that there were actually very few ghostly monsters in the canon – wraiths, spectres, groaning spirits, and ghosts being the only incorporeal undead. And all of these were of rather high power and, with their life energy draining ability, horribly lethal... 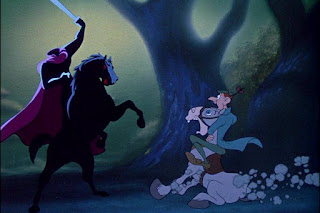 So I set out to fix that hole in the low-level incorporeal undead section of the monstrous corpus. I figured I’d work up a couple low-hit die, low-power ghosts…

As is usual with me, though, things kind of got out of hand from there. My little five-pager grew into a whopping 64 pages, with a complete list of 10 different basal ghostly types, 75 ghostly special abilities, 23 new magic items, interpretations on scores of spells, a whole new system for ethereal sensitivity, and in-depth analysis and rulings on every element that might affect interaction with ghosts, including the development of the uses and dangers of ectoplasm.

I started on September 16th, and wrote 55,859 words in 22 days, averaging just over 2,500 words per day… my best rate of writing in years, and this while working a full-time job.

At times, I literally felt like a man possessed, especially once I’d decided I wanted this to be a comprehensive look at ghosts. I delved deep into my classic comic-book education, having grown up reading Casper as well as all the various weird and spooky comic-books that were “never really meant for kids,” but we all read anyway. I dredged up all my memories of the creepy movies and eerie TV shows I’d seen, and all the old ghost stories and Gothic literature I’d devoured in my college days.

And I’d determined that there was a LOT of stuff that could be used in a ghostly RPG supplement!

First I sketched out the 10 different basal ghost types, wanting to have something for everyone at every level of adventure. I penciled in the basic attributes, especially the weapon immunities, touch damage, and life-draining abilities of the existing ghost, created a spectrum from weakest to strongest, and varied that with basal Armor Class improvements as the hit dice improved.

The original scheme with the four original ghosts worked fairly nicely, with a regular power curve matching fairly well to hit die progression (though the original ghost kind of blew that with some of its odd resistances). So I adjusted things here, jiggered them there, and made things fit… though I felt that a 1 hit die ghost with life-level draining was too much of a danger. So for the “lesser ghosts” as I termed them, I implemented the fear attacks, rather than life-level draining, which seemed more in line with the existing myths, legends, and ideas about low-power ghosts being merely scary rather than deadly. 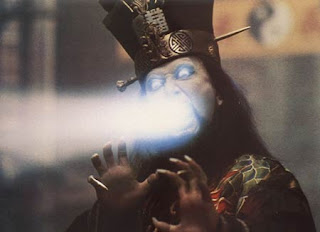 This also quite naturally broke the two types of ghosts, lesser and greater, into a natural “tragic” versus “evil” sort of ghost, though of course, the two origins often meet and mesh. This allowed for less powerful but still dangerous ghosts that players could interact with in a manner that was not immediately violent and deadly.

I then scoured my memory for all the different things I’d ever seen ghosts do in stories, comic-books, TV shows, and movies, and from there built out the ghostly special abilities section. I eventually just had to limit the special abilities to 75; there are naturally an infinite number of abilities possible, but these cover most of the broadest possibilities.

My interpretation of ectoplasm is based both on the old, classic form of ectoplasm “experienced” during the age of spiritualism and, naturally, ectoplasm as developed in the Ghostbusters movies. Because ectoplasm is… Just. So. Cool. Of course, modern Ghostbusters-style technology and classic mysticism don’t quite mix, so I cloaked the modernisms in a techno-magical pseudo-steampunk style, ergo the various techno-magical devices for capturing and imprisoning ghosts and using and developing ectoplasm. 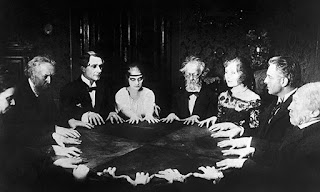 The many uses of ectoplasm, and their dangers, are a natural outgrowth of the same in Ghostbusters… and of course, what player or Labyrinth Lord worth his dice doesn’t love experimenting with powerful and extremely dangerous new forms of magic?

So too the evolution of Sixth Sense, Sensitives, and Mediums, the development of which were influenced both by the classical spiritualism movement and another movie, in this case, Ghost. And, like ectoplasm, and distinctly unlike the Vancian magic system, use of these abilities is uncertain and, in many cases, extremely dangerous… and thus extremely tempting for use by players, no doubt!

Finally, of course, no exhaustive look at ghosts would be complete without developing the reasons and methods of their creation, their continued existence, and how that and their natures interact with the use of various spells. Add in a few more spells, and some general rulings for broad circumstances, and we were almost done… 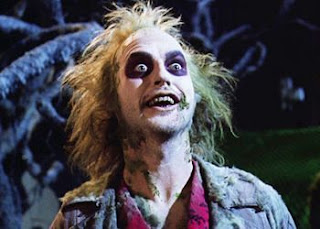 The Creepy Appendix N provides plenty of leads for interesting and useful information on ghostly adventures and campaigns.

Throughout the writing of Ghosts -- The Incorporeal Undead, my wife Jodi was both an inspiration and sounding board. Her knowledge of magic, the mystical, and the spiritual astounds me, as does her boundless creativity and support, without which none of this would have been possible.