Capital: None; the major settlements are:
Aghazari [City of ] (pop. 16,000)
Dharangide [] (pop. 20,000)
Mekhnazai [City of ] (pop. 26,000)
Zagigi [City of ] (pop. 12,000)
Humans: 3,600,000
Demi-humans: None
Humanoids: Gnoles (300,000), Gnolls (200,000), Half-Orcs (100,000), Orcs (30,000)
Monsters: Many, especially the nyumbanyama or “thunder lizards,” i.e. dinosaurs, of an evolved sort that are kept as domesticated animals. The larger, wild varieties are rare but not unknown. Pterodactyls are common along the . The plains are home to centaurs. Giant ants, hyenas, lizards, scorpions, snakes, and spiders are common in the wastes, rarer so are basilisks and cockatrices. Hidden valleys in the Black Sands are home of blemmyes, chromandi, macrocephali, muscaliets, myrmecoleons, skiapods, syrictae, ypotrylls, and stranger creatures. The scattered ranges of the and are home to cyclopes, griffons, harpies, hill giants, manticores, and wyverns, while those that are actively volcanic are lairs for red dragons, fire giants, and salamanders.
Languages: Kartaghan; Eoshan (many dialects), Kartaghan, Manday, Deshreti, Gnoll, Orcish, Firdawsiyah, Elysian.
Resources: Gold, ivory, nyumbanyama hides, silver, slaves, spices

Eosha is a land of great contrasts. The plains along the shores of the Sea of Fire are a patchwork of villas, plantations, and meadows; inland are dry, tall plains, bone-dry deserts, and terrible, rocky wastes; further south stand tall peaks of basalt and obsidian, many still active volcanoes; and south of these, the green leafy jungles of the Yasdunn. The contrasts also divide the peoples, a mix of Manday and Kartaghan, Elysian and Deshreti; for the cities are ruled by a few of great wealth and power, and peopled by masses of the destitute and desperate. 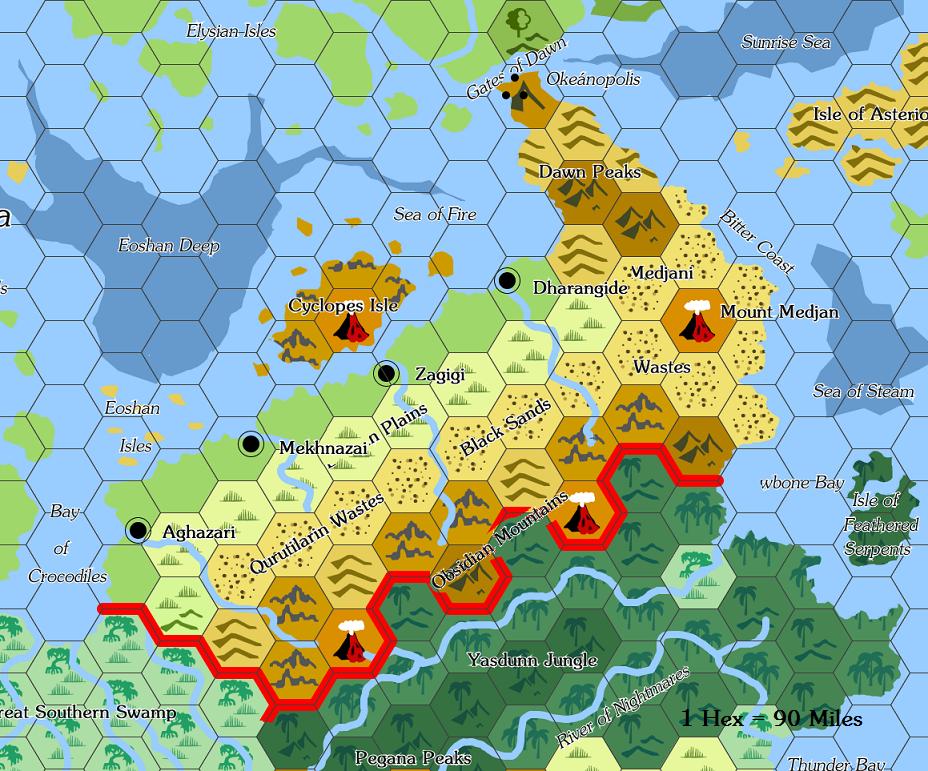 Though once the heartland of the Second Caliphate, the never had a strong hold on the hearts of the local peoples, and more than a hundred gods and demons are worshiped in the cities and villages of Eosha. The religious divisions of the people are continued in the political sphere, with every city and most major towns and even villages all being independent of one another. The lands between these settlements are home to disparate tribes, clans, and bands of various races and cultures, themselves all independent and at times, xenophobic.

Ruins dot the landscape; those of Deshreti, Elysian, Paynim, and Saracen sort are most common, but there are others that pre-date the rise of Deshret, no few of them most mysterious and non-human of aspect.
Posted by James Mishler at 9:17 AM

Email ThisBlogThis!Share to TwitterShare to FacebookShare to Pinterest
Labels: A to Z of Olden Lands, Eosha, Gazetteer of the Olden Lands, Olden Lands, Previews